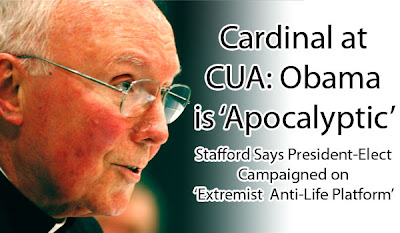 James Francis Cardinal Stafford told an audience last night that America’s future with Obama as president will be like Jesus’ agony in the garden.
The Catholic University of America Tower and LGF Quick Links reported:

His Eminence James Francis Cardinal Stafford criticized President-elect Barack Obama as “aggressive, disruptive and apocalyptic,“ and said he campaigned on an “extremist anti-life platform,” Thursday night in Keane Auditorium during his lecture “Pope Paul VI and Pope John Paul II: Being True in Body and Soul.“

“Because man is a sacred element of secular life,” Stafford remarked, “man should not be held to a supreme power of state, and a person’s life cannot ultimately be controlled by government.”

“For the next few years, Gethsemane will not be marginal. We will know that garden,” Stafford said, comparing America’s future with Obama as president to Jesus’ agony in the garden. “On November 4, 2008, America suffered a cultural earthquake.”

Cardinal Stafford said Catholics must deal with the “hot, angry tears of betrayal” by beginning a new sentiment where one is “with Jesus, sick because of love.”

The lecture, hosted by the Pontifical John Paul II Institute for Studies on Marriage and Family, pertained to Humanae Vitae, a papal encyclical written by Pope Paul VI in 1968 and celebrating its 40 anniversary this year.

Stafford also spoke about the decline of a respect for human life and the need for Catholics to return to the original values of marriage and human dignity.

The Return of Scipio has more on the Obama’s war on God and the Catholic Church’s war on Obama:

More than 90 percent of blacks voted for a man who supports the murder of half of all conceived black children.