Remember that tax cut promise for 95% of (working or not working) Americans?

They’re still counting votes from last week’s election and already the media is excusing Obama from his promise to cut taxes!

The AP carries The Messiah’s water:

People want the tax cuts promised during the presidential campaign, but may be willing to wait while President-elect Obama takes on the larger issue of fixing the economy.

Eighty percent say trimming personal tax rates should be a goal when the new president takes office in January, but only 36 percent say the cuts should a very top priority, according to a new Associated Press-GfK poll. That was less than half the 84 percent who cited improving the economy as a No. 1 goal, and the 80 percent who said creating jobs should be a paramount task.

“I don’t think it’s going to work in this instance,” said Ryan Anderson, 31, a Democrat from Bloomington, Minn., who thinks tax reductions would have little impact on most families’ budgets. “That’s kind of like shooting a BB gun at a freight train.”

Obama promised to cut taxes for working families during the campaign. 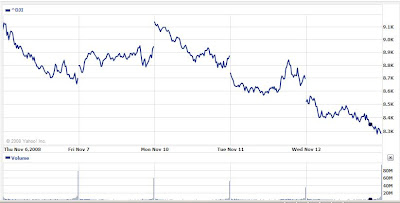