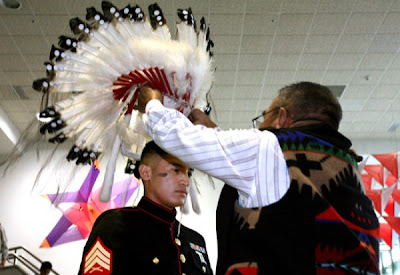 Iraqi Sgt. Tyson Two Two was welcomed home by his family at the Billings Logan International Airport on Saturday after his tour in Iraq.
The Billings Gazette reported, via LGF:

Saturday afternoon in the baggage claim lobby of Billings Logan International Airport, Two Two, 24, a sergeant in the United States Marine Corps and member of the Northern Cheyenne Tribe, was welcomed home from a seven-month tour in Iraq by about 50 family members and friends from the Northern Cheyenne reservation.

“I knew something was going on today because they asked me to come in uniform,” the 2002 Colstrip High grad said with a smile while surveying the crowd gathered at the airport in his honor. “It feels great to be back. It’s been a long time.”

Two Two was in Iraq from April to October this year as a Marine transport mechanic, supporting combat security teams at Al Asad Air Base, in the towns of Fallujah and Ramadi and along the Jordanian and Syrian borders. 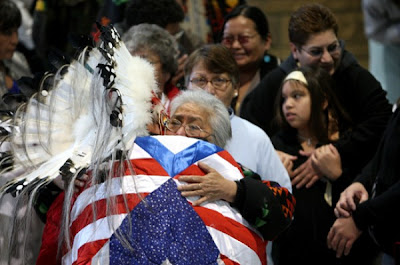