At least 80 people have been killed and over 200 injured in several co-ordinated attacks in India’s financial capital, Mumbai. It’s reported that hostages are being held in two 5-star hotels in the city. Four terrorists have been killed and nine taken prisoner, according to Indian authorities.

(9:00 PM CST) The guests at the Taj Hotel are still being told to stay in their rooms.
The hotel has still not been secured.

Here’s a photo of one of the Mumbai terrorists: 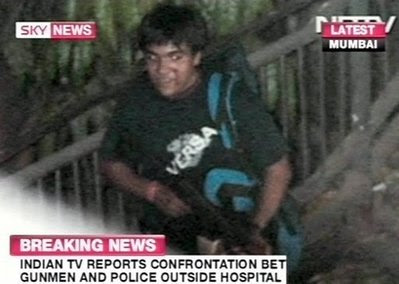 TV grab from Indian TV via Sky News shows an armed man suspected to be one of the assailants, according to Sky News, after a series of attacks in Mumbai. Nearly 80 people were killed in a series of coordinated attacks in the Indian city of Mumbai late Wednesday, as heavily armed Islamist militants hit two luxury hotels and took foreign guests hostage. (AFP/SKY NEWS) 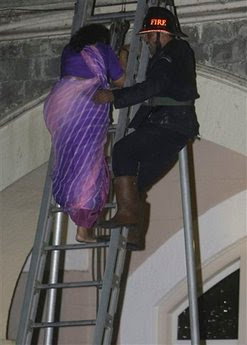 The terrorists came in on boats. Their are reports that the boat may have come in from Pakistan.
Hat Tip C. Jordan

Five Jewish families have been taken hostage by the Islamic terrorists.

India Today— 101 are dead– 287 are wounded.
2 hostages were shot dead in Cama Hospital.
10 landmarks were targeted.
11 policemen including a top terror expert were killed in the fighting.

Barcepundit has a roundup of developments from Mumbai. The death toll jumped to 125 overnight.