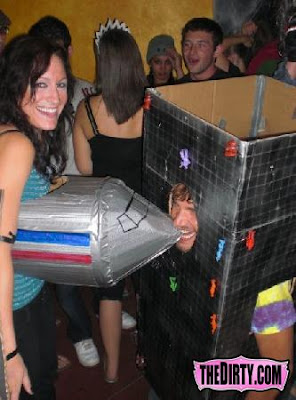 This was posted at The Dirty:

“This guy and girl dressed up as one of the twin towers and a plane for halloween, when the girl was asked if she thought she would offend anyone she replied, “No, it’s cool, my aunt died on the 64th floor, and it was a conspiracy anyway.” Are you kidding me? I’m all for grossly offensive jokes but not when it’s taken THAT far.”

Well, it was seven years ago.
Maybe it’s time to see the humor in it.

Thanks Bug… I didn’t notice the people falling from the tower until you pointed them out.

MORE… From Jacki– “Per the request of more than half the people who posted comments on this picture at The Dirty– the names of the people in it are Nicole Cass*se and Yael Nadel-Cad*xa but that’s just comments. It looks like it was at U of A.”

UPDATE: The Dirty has an update on the twin buffoons.