The “Spin Cycle” stands by a report that was never written and never published. 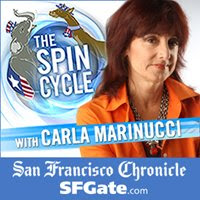 The San Francisco Chronicle is standing by their non-existent newspaper report on Barack Obama’s coal-killing comments from an interview back in January.
SFGate reported:

”Barack Obama explained his plan to the San Francisco Chronicle this year,” she told a rally in Ohio Sunday. ”He said that sure, if the industry wants to build coal-fired power plants, then they can go ahead and try, he says, but they can do it only in a way that will bankrupt the coal industry.”

She added, ”And you’ve got to listen to the tape.”

”Why is the audiotape just now surfacing?” Palin asked the crowd, according to a report from CBS News. Someone in the crowd shouted, ”Liberal media!’

Let’s be very clear: the Chronicle did not, and has never, hidden any interview, audio or video, of Obama from its readers.

The truth: the paper’s January editorial board session with Obama included comments about coal. The entire interview has been in the public domain, available on line to the public — and to the McCain campaign — since early January.

Unfortunately for SFGate– Blogger Tom Blumer posted their complete report from the Obama interview back in January 2008.
No where in their report on the interview did they mention Obama’s plans to kill the coal industry.

This round goes to Newsbusters.

HotAir now has video of Obama talking about bankrupting the coal industry.

Meanwhile… Republicans targeted voters in Pennsylvania, Ohio and other coal-producing states saying that “coal jobs, which are so important to our community, are in jeopardy.

Sweetness and Light has more on SFGate’s hidden report.

And, The Corner mocks SFGate’s hilarious objection to Palin’s charges.