Obama announced at the CNN YouTube debate last year that he would be willing to meet with the world’s dictators including the Iranian regime in his first year in office.
Here’s the video:

QUESTION: In 1982, Anwar Sadat traveled to Israel, a trip that resulted in a peace agreement that has lasted ever since.

In the spirit of that type of bold leadership, would you be willing to meet separately, without precondition, during the first year of your administration, in Washington or anywhere else, with the leaders of Iran, Syria, Venezuela, Cuba and North Korea, in order to bridge the gap that divides our countries?

OBAMA: I would. And the reason is this, that the notion that somehow not talking to countries is punishment to them — which has been the guiding diplomatic principle of this administration — is ridiculous. 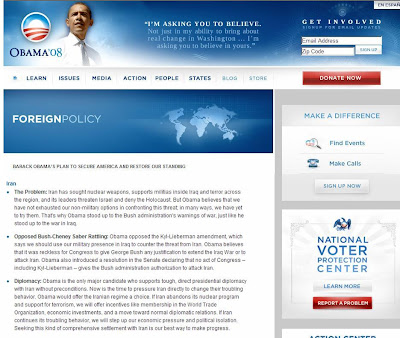 This was Obama’s position on using diplomacy with wacky regimes:

Diplomacy: Obama supports tough, direct presidential diplomacy with Iran without preconditions. Now is the time to pressure Iran directly to change their troubling behavior. Obama and Biden would offer the Iranian regime a choice. If Iran abandons its nuclear program and support for terrorism, we will offer incentives like membership in the World Trade Organization, economic investments, and a move toward normal diplomatic relations.

Barack Obama stuck with this precarious position throughout the campaign.
It came up several times and both Senator Clinton and Senator McCain attacked him for wanting to sit down with Ahmadinejad without preconditions. 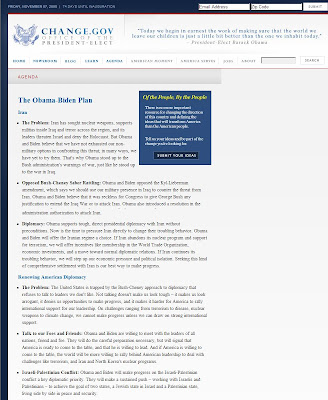 It looks like another campaign promise has already been broken by Team Obama .
At this rate there won’t be any promises to break after Inauguration.