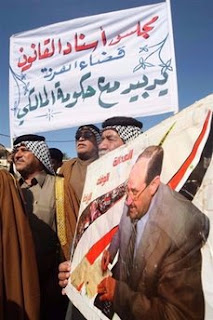 Shiite Muslims hold up banners as they protest through the streets of the southern city of Basra, 550kms south of the capital Baghdad, in support of the Iraqi-US accord, November 19. Iraq’s parliament appeared likely to approve a comprehensive US military pact that would see all troops leave by the end of 2011 despite a loud and contentious debate of the measure on Thursday. (AFP/Essam al-Sudani)

But, not everyone is happy with the US-Iraqi pact…
Shiite lawmakers loyal to Moqtada al-Sadr disrupted the reading US-Iraqi security pact today in Parliament:

The Sadrist block holds 30 seats in the 275 seat Parliament.
The AP reported:

Iraqi lawmakers have finished a second reading of the Iraq-U.S. security pact as the parliament was engulfed in protests from opposition lawmakers for a second straight day.

The reading is part of the legislative process leading up to a vote on the pact scheduled for November 24.

Lawmakers loyal to Shiite leader Muqtada al-Sadr sought to disrupt Thursday’s reading, as they did the previous day.

They pounded on desks and shouted in an attempt to drown out the voice of the lawmaker reading the draft aloud. Shouting matches ensued, with Speaker Mahmoud al-Mashhadani barely able to control the chaos in the 275-seat chamber.

Meanwhile… The top Iraqi Shiite cleric Grand Ayatollah Ali Husseini al-Sistani on Thursday lashed out at lawmakers who left for the Hajj instead of voting on the US military pact.