Hope and Change in action…
The Obama Administration is already considering talks, without preconditions, with the Iranian Regime.
…The same regime that has been killing our soldiers for the last 5 years in Iraq. 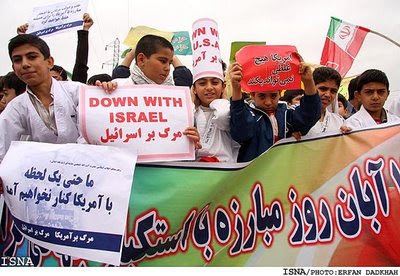 This goes back to that fundamental Leftist belief that America is the problem and that regional regimes are the answer because they all want peace and stablity.
Reuters reported:

President-elect Barack Obama plans to try a more regional approach to the war in Afghanistan including possible talks with Iran, The Washington Post reported on Tuesday, citing national security advisers to Obama.

The president-elect also intends to move ahead with a planned deployment of thousands of additional U.S. troops to Afghanistan and refocus on the hunt for al Qaeda leader Osama bin Laden, the newspaper reported.

However, the Obama team is far from working out how to bring bin Laden back to the forefront of the U.S. counter-terrorism agenda, The Washington Post reported.

While emphasizing the importance of continuing U.S. operations against Pakistan-based Taliban fighters who attack U.S. forces in Afghanistan, the incoming administration intends to remind Americans about the fight against Islamist extremists and the September 11 attacks, the newspaper said.

“This is our enemy,” on Obama adviser told the newspaper, referring to bin Laden “and he should be our principal target.”

Iran, on Afghanistan’s western border, has been kept at arm’s length by the Bush administration, but should be considered in formulating a new Afghanistan strategy, a senior U.S. military official was cited as saying.

Surely the Iranian Regime can be trusted.
It sounds like Obama and his cronies still do not consider the Al-Qaeda terrorists in Iraq a threat, though.
Have they even admitted that Al-Qaeda is operating in Iraq, yet?

Thank you, President Bush for keeping us safe for the past 7 years anyway.

More… Jules Crittenden has more on the Afghanistan challenge for Obama.
Michael Yon has advice for the new adminstration.