Here is a look at the county by county breakdown on the 2008 vote.
The Washington Post put together these 2008 election maps.

Obviously there are still more red counties in America: 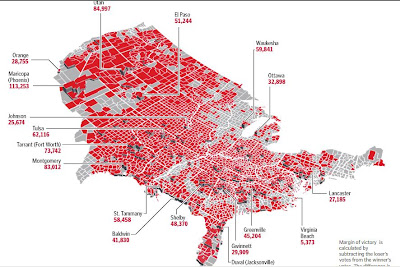 But, Barack Obama won much higher margins in the populous blue counties: 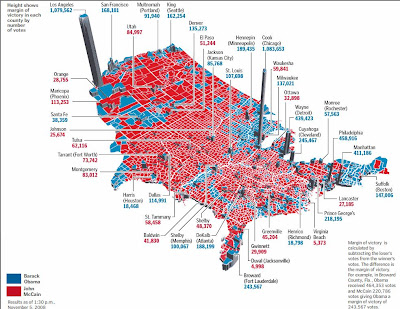 Here is a 2004 US election map as a comparison: 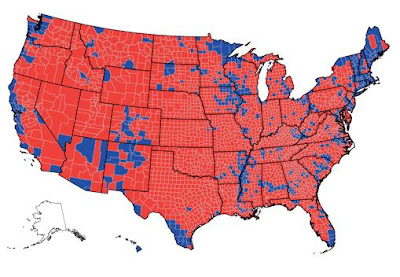 Turnout– As of Saturday at 1 PM CST approximately 124,200,000 Americans voted in this election.
In 2004, 122.3 million voted.
So, although there are still votes being counted(?), this year saw only a slight increase in turnout.

This is not a condemnation of John McCain.
It was another very difficult year for the GOP.

George Bush took the national security issue off the table. His policies have absolutely decimated al-Qaeda and the radical Islamic movement.
The country does not have to worry about the evil Saddam Hussein regime.
Al-Qaeda and the Taliban are no longer in complete control of Afghanistan.

Iraq was not an issue after the Bush-Petraeus Surge showed such amazing success.
Americans aren’t worried about national security today. They are scared as hell about the economy.
Not even Barack Obama’s radical anti-American past could affect the election.
Obama and Democrats cleaned up.

More… This is interesting:

The Obama Camp and ACORN were able to increase their turnout in all of the battleground states.

UPDATE: Here’s an interesting spreadsheet showing how the youth vote was a major factor in 2008.

UPDATE 2: As far as a mandate goes… This graph shows the US president’s margin of victory over the last 100 years: 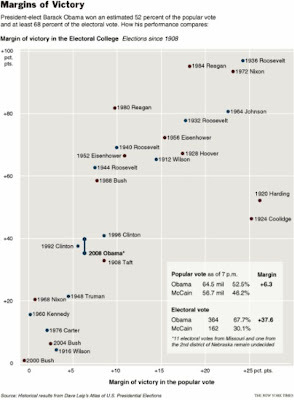