Bummer. Several antiwar protesters climbed scaffolding at the National Archives for a sit-in protest today until the winds and rain picked up. 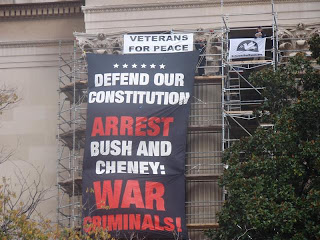 Sadly, after a few hours of protesting, a rain and hailstorm blew their banner off the building and soaked the peace protesters.
After Downing Street reported on the drenched protest:

Mike Ferner gave me a report over the phone at 2:30 p.m. on Saturday. He said that at 7:45 a.m. he and others had arrived at the Constitution Avenue side of the Archives. There had been no police presence on this side because the Pennsylvania Avenue side had been swarming with police focused on blocking traffic for G-20 delegates’ endless limousine motorcades. That remained the case throughout the day, as world leaders burned oil and produced hot air.

Eight people, including six members of Veterans for Peace, one member of Iraq Veterans Against the War, and one member of Military Families Speak Out got around a construction fence, went up the Archives steps, and climbed 90 feet of scaffolding. From the top of the building they unfurled giant banners, the first at about 8:15 a.m. and the second around 8:45. The first read: “Defend Our Constitution, Arrest Bush and Cheney, War Criminals!” The second said: “We Will Not Be Silent.”

The enormous banners stayed up until about 2:30 when it started to rain, hail, and blow. Many hundreds of people stopped by. One man, who said he’d seen the banners from blocks away, said he’d come over imagining the Archives had opened an exhibit on freedom of speech…

And these people provided support on the ground:

UPDATE: Jonn Lilyea has several photos from the protest.