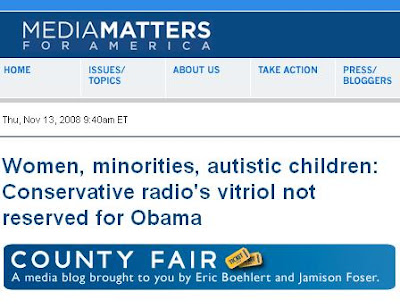 John Podesta’s Media Matters is paving the way for the resurgence of the Fairness Doctrine. Podesta, a co-chairman of President-elect Barack Obama’s White House transition team, and former chief of staff in the Clinton administration, was a critical player in the startup of this Far Left “media monitoring” website.
Media Matters is actively pushing to reinstate the Fairness Doctrine that would essentially silence talk radio.

As Media Matters for America documented, the nationwide network of conservative radio hosts — personalities without the national prominence of Sean Hannity and Rush Limbaugh — engaged in an all-out effort to foment hate and suspicion of Barack Obama by participating actively in an echo chamber of smears and falsehoods about the primary candidate and then Democratic nominee. But these same radio hosts were by no means discerning in their vitriol and did not save their ire solely for Obama. The smears ran the gamut, both in the context of the 2008 election, as Media Matters noted in the previous report, and beyond. Immigrants, female politicians (and women in general), the LGBT community, the poor and homeless, minorities, progressives, unions, college students, and even autistic children were targets of these radio personalities’ invective. Media Matters and Colorado Media Matters have compiled some of their more noteworthy attacks on these groups…

Look for the crackdown on conservative radio in the months ahead.

NewsBusters reported more today on the Democrats serious attempt to reinstate the long-defunct FCC regulation, described as the “Censorship Doctrine.”