The “pay as you go” shop will be closing its doors.
The owner was getting stiffed by her Seattle customers.
The shop that asks customers to “pay with your heart and your head” is two months behind on rent. 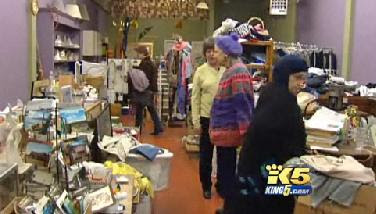 Of course, the Seattle news blamed the closing on the economy and not on the failed business model.
NWCN reported, via Free Republic:

A shop that lets you pay what want is becoming another casualty of the sagging economy.

Come Thanksgiving, the OpShOp on Seattle’s Queen Anne Hill will close its doors.

“I ask people when they pay to pay with their head or their heart,” said OpShOp owner Jane Horowitz.

From whimsical holiday plates to obscure albums to hundreds of other items, the customer determines the price for everything.

“I also like telling the person who left it where it’s going. I think making that connection is vital to every community,” said Horowitz.

“It’s an act of human generosity and kindness in a time when we need that,” said customer Judy Endejan.

A bit chunk of Horowitz’s profits go to funding special programs in public schools, but what’s left over just isn’t enough to keep the business going.

“I can’t pay my rent,” said Horowitz. She is two months late on the rent and has a week to move out.

The closing sale ought to be a blowout.