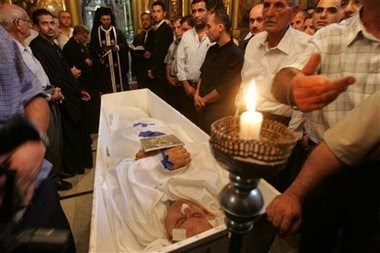 A brave Palestinian writer Al-Nasser Al-Najjar spoke out on the persecution of Christians in the Muslim World today.
MEMRI translated this brave man’s column:

In his column in the Palestinian daily Al-Ayyam, ‘Abd Al-Nasser Al-Najjar criticized the persecution of Christians in Arab countries, with a particular emphasis on the Christian population of the Palestinian Authority. [1]

Following are excerpts from the article:

“In Iraq, a crime is currently being committed – another in a series of iniquities brought by the winds of change that came in the wake of the [U.S.] occupation, which sought to impregnate Iraq with the seed of democracy. [But] the [resulting] fetus emerged deformed and weird. The worst outcome of this situation is, possibly, the carnage against ethnic communities and minorities that has swept through Iraq. Neither Sunnis, nor Shi’ites, nor Christians, nor Kurds, nor Turkmen, nor [members of] other [groups] have managed to escape it.

“However, the string of murders and expulsions of Christians, which has been going on for several months, is by far the most grievous – [and] it [must be taken as] a warning that hostility and crimes against minorities may spread to the neighboring countries [as well].

“Christians are being persecuted not only in Iraq, but in most Arab countries, regardless of their numbers there. They are subjected to every possible kind of discrimination, as well as expulsion. The problem is that it is not only Arab officials who are remaining silent [in the face of these crimes] – [they do so] because their primitive mentality is centered on the cult of the ruler – but, alarmingly, so are Arab intellectuals, the elites, non-government organizations, and leaders of the private sector. All these groups look on at these unprecedented [acts of] folly without apprehending the danger with which these crimes are fraught.

“Statistics show that in 2005 the number of Christians in Iraq was as high as 800,000. By early 2008, it had dropped by half, [indicating] that 50 percent of Iraqi Christians had been expelled from their homes and lands.

“Today, this problem is also rampant in Egypt, Lebanon, Algeria, and Palestine – and while the situation may be slightly different in Palestine, the trend is the same.

“Let us be honest with ourselves and courageously say out loud that Palestinian Christians are taking many severe blows, yet are suffering in silence so as not to attract attention. I do not refer here to the suffering caused by the occupation… but to actions of the past 20 years at least – that is, since the beginning of the occupation in 1967 – involving the confiscation of Christian property, especially in Bethlehem, Ramallah, and Al-Birah.

“What makes things worse is that those who are plundering [the Christians’] property are either powerful [in their own right] or are backed by various elements, among them high-ranking military officials or influential members of large clans.

“Attempts by the political leadership to partially rectify this situation have failed. Nor has the judiciary system been able to [resolve] many of the problems, which we still face today. Over the past few years, several of my Christian friends have told me of the harm they have suffered, including various threats, even death threats, for trying to gain access to their lands after they were taken over by influential Bethlehem residents.

“Furthermore, there has been an attempt to marginalize Christian culture in Palestine, even though it is rich and deeply rooted [there]. This began with [accusations] of unbelief [against Christians] – a move that ultimately harmed Palestinian society as a whole…

“Despite all the injustices [against the Christians], no one has seen or heard of any constructive action to curb it and to [defend] the Christians’ rights – whether by the elites, by any of the three branches (executive, legislative, and judiciary), by non-government organizations, or even by the political factions themselves. [Such action should have been forthcoming] not out of kindness and compassion, but [due to] regarding Palestinian Christians as indigenous to this land, and [therefore] no different from us, with the same rights and obligations [as Muslims].

There is more at MEMRI.