Barack Obama and his family will skip the service today for his grandmother.
His white grandmother Madelyn Dunham raised him. 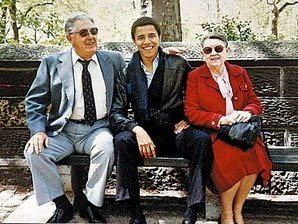 Madelyn Dunham and her husband posed with grandson Barack Obama in a New York City park on a visit when Obama was a student at Columbia University. Dunham, a retired Hawai’i bank executive, died Nov. 2 at age 86. (Honolulu Advertiser)

Barack and Michelle Obama will not be in Hawaii today for his grandmother’s memorial.
The AP reported:

memorial service for President-elect Barack Obama’s grandmother, Madelyn Payne Dunham, will be held Friday at the National Memorial Cemetery of the Pacific in Honolulu.

The Borthwick Mortuary said Wednesday that the service will be open to the public, but the Obama family will not be in attendance.

The president-elect is scheduled to visit Hawaii in December to honor his grandmother, who helped raise him in Honolulu and died two nights before the election. Officials have not specified when Obama will make the trip.

Dunham’s husband, Stanley Dunham, who fought in World War II, was buried at the cemetery following his death in 1992.

Barack Obama compared his white grandmother to the racist anti-American Jeremiah Wright during his campaign for president.