Yid With Lid reported that Susan Rice is one those responsible for letting Osama Bin Laden get away in the 1990’s. 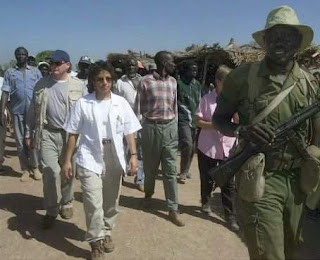 On Monday, Barack Obama is expected to announce that he has chosen the same Susan Rice as his UN Ambassador and that the position will be elevated to a Cabinet Level job.
Here’s more on the country’s next UN Ambassador:

She deserves a hefty portion of blame for the fact that Osama bin Laden wasn’t neutralized during the 1990s.

“The FBI, in 1996 and 1997, had their efforts to look at terrorism data and deal with the bin Laden issue overruled every single time by the State Department, by Susan Rice and her cronies, who were hell-bent on destroying the Sudan,” one-time Clinton diplomatic troubleshooter Mansoor Ijaz told radio host Sean Hannity in 2002.

Richard Miniter, author of the book “Losing bin Laden,” concurred, saying Rice played a key role in scuttling the deal that could have prevented the 9/11 attacks on New York and Washington.

In November 2003, Miniter told World Magazine that while Sudan was anxious to turn bin Laden over to the U.S., Rice – then a member of Clinton’s National Security Council – questioned Khartoum’s credibility.

“Rice [cited] the suffering of Christians [in Sudan] as one reason that she doubted the integrity of the Sudanese offers,” said Miniter. “But her analysis largely overlooked the view of U.S. Ambassador to Sudan Tim Carney, who argued for calling Khartoum’s bluff.”

Power Line wrote more on Susan Rice back in February when she showed up on the Obama team.

The Campaign Spot has more on Rice.