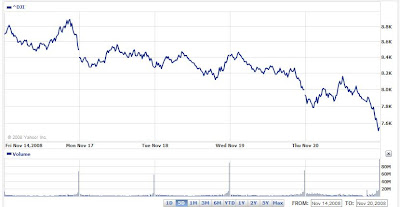 The Dow is down nearly 20% since Barack Obama won the presidential election.
This is the largest post election stock market sell off in history.

“Barack Obama and the Wisdom of Crowds”

If we zoom into the September-to-November timeframe, we’ll see something very enlightening. By late September it was increasingly clear to Intrade.com bettors that Obama was going to win the election. From 9/28 to 9/29 Obama’s Intrade price went from 57 to 61, which represented a huge jump… Around September 29th the market began its collapse.

Call it a crisis of confidence. Call it a Fannie-inspired meltdown. Call it what you will, but the markets appear to have reacted to Obama’s promises of economic “fairness”, “spreading the wealth” and raising taxes on the job creators of society.