Media. Is. Dead.
After a two years of bloviating, spinning and promising to retreat– the media is finally reporting that Obama’s timetable on Iraq will not work.
…Three days after the election.
Yahoo reported:

Senior U.S. military officials will likely advise Barack Obama to adjust his campaign pledge to withdraw all U.S. combat troops from Iraq by mid-2010. While promising a 16-month timetable for getting all U.S. fighting forces out, Obama repeatedly insisted on what he calls a “responsible” withdrawal. Pulling nearly all U.S. troops and equipment out of Iraq in 16 months is “physically impossible,” says a top officer involved in briefing the President-elect on U.S. operations in Iraq. That schedule would create a bottleneck of equipment and troops in the south of Iraq and Kuwait where brigades repair, clean and load vehicles and weapons for the trip home, said the official. Others say U.S. could conceivably pull out on that time scale, although that would require leaving more equipment behind. A more important concern that, officers believe the security gains in Iraq would be put at risk if troops were withdrawn before the Iraqi security forces are in a position to protect their own communities and borders.

The fact that Barack Obama and the democrats were wrong on Iraq did not affect this year’s elections.
Thanks to President George W. Bush and the US military Iraq is a successful democracy in in the Middle East. 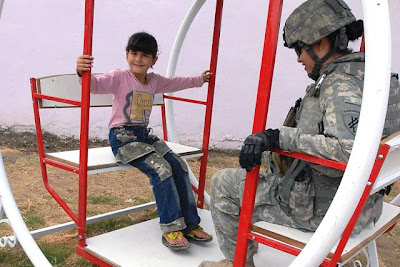