UPDATE: This pretty much sums it up… 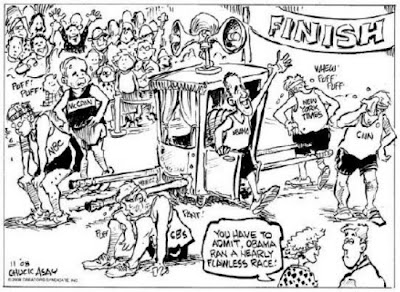 Now that the elections are over the media is just now coming clean.
Chris Matthews took a vow on national TV to continue his nonstop bias for Obama this week:

The Washington Post has not yet made a public oath to Obama.
But, the WaPo did admit to their bias today:

The Post provided a lot of good campaign coverage, but readers have been consistently critical of the lack of probing issues coverage and what they saw as a tilt toward Democrat Barack Obama. My surveys, which ended on Election Day, show that they are right on both counts…

Stories and photos about Obama in the news pages outnumbered those devoted to McCain. Post reporters, photographers and editors — like most of the national news media — found the candidacy of Obama, the first African American major-party nominee, more newsworthy and historic. Journalists love the new; McCain, 25 years older than Obama, was already well known and had more scars from his longer career in politics.

…One gaping hole in coverage involved Joe Biden, Obama’s running mate. When Gov. Sarah Palin was nominated for vice president, reporters were booking the next flight to Alaska. Some readers thought The Post went over Palin with a fine-tooth comb and neglected Biden. They are right; it was a serious omission. However, I do not agree with those readers who thought The Post did only hatchet jobs on her. There were several good stories on her, the best on page 1 by Sally Jenkins on how Palin grew up in Alaska.

Journalists not only love new…
They love Democrats.
Sarah Palin was new but they raked her over the coals.
Such is the demise of our mainstream media.
The one thing that is clear after this election– If you want to find the truth you will have to go elsewhere for your news.

UPDATE: This comes from David in Alaska:

Now that the media has completed thier ‘mission’ in getting Obama elected they are willing to share their bias for the greater good. Now that they are showing us this, what makes us believe that they still won’t feel the need to cover for him in the future. Are we to suddenly think that the mass bias of deception that was completely organized in the media will now stop?

It is time for the 48% that voted for McCain to cancel all media subscriptions and let the media know how you feel about their admitted deception and activism.

Or, we could just let them continue pimp for democrats?