TERRORISTS HAVE TAKEN HOSTAGES AT THE TAJ MAHAL HOTEL
An ATS team has arrived at the Taj, where fresh blasts have been reported.
There was at least two explosions in the dome of the Taj.

“Gunmen took 40 hostages and half of them foreigners. They wanted anyone with a British or American accent!” –NDTV.
Terrorists did not even spare hospitals— Gunfire reported at GT and Cama.
There are reports that hostages were taken in Cama hospital of the city. 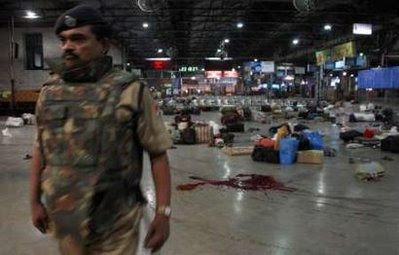 A policeman stands guard after shootings by unidentified assailants at a railway station in Mumbai. (Reuters)

Terrorists are reported to be moving through city in emergency vehicles and staging multiple attacks. Shootings, explosions and other attacks are taking place throughout the city.

There are reports of hostages being held at several locations. Americans and other westerners are reportedly being rounded up by terrorists in several hotels.

All security personal are being called up but are still overwhelmed by the scope of the terror attack.

The attacks have been blamed on Muslim militants. 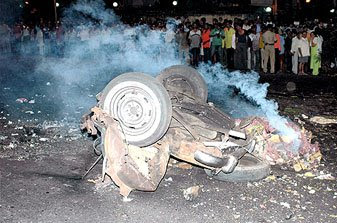 Mortal remains of a taxi after terror attack at western express highway near domestic airport in Mumbai. (Hindustan Times) 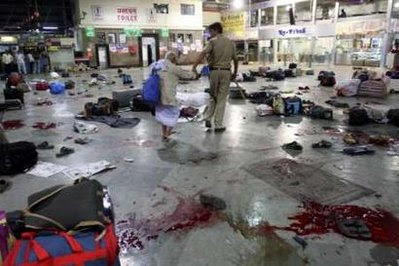 A policeman walks with an elderly man after shootings by unidentified assailants at a railway station in Mumbai. (Reuters)

Here is amazing video of live firing from the scene:

Lawhawk is covering the massacre.

A little known outfit Deccan Mujahideen has claimed responsibility for the attacks.
There are now reports of firing at JW Marriott Hotel as well.

UPDATE: Horror! There is fighting reported from the hotels.
The operation is ongoing. Security forces are moving throughout the city. There could be more targets throughout the city. A couple of terrorists have been killed away from the downtown. This is a new kind of urban jihad.
FOX News is following the story.

UPDATE: More than 100-120 guests are held hostage in Mumbai!