Figures. It wasn’t that long ago that the American Left was burning and crapping on the flag.
Suddenly, all of that has changed. 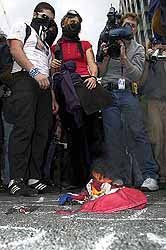 Veteran Lou Schrader of Las Cruces, New Mexico flew his flag upside down on Wednesday in protest of Barack Obama winning the presidency.
This alarmed his liberal neighbors.
The Sun-News reported:

“Now that there’s an African-American president, he’s protesting the U.S., and I think it’s funny because, if you love your country, you love it no matter what.”

Kollaros said he backs freedom of speech, but flying the flag upside-down shouldn’t be done lightly because it could send the wrong message.

“We’ve got to be careful about how we do that, because we don’t want to offend people,” he said.

Robert Pritchet, 30, who described himself as “open-minded,” said he’s personally not offended by the upside-down flag, but it opens up the door for other people, especially veterans, to be.

“I think he could have done something different,” he said. “That could have been offensive; that’s the symbol of the United States.”

My how times have changed.
They’re even wearing red, white and blue in Seattle again.