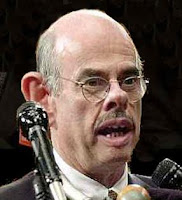 Rep. Henry Waxman (D-CA) will become the next chairman of the House Energy and Commerce Committee.
The intra-party showdown for the coveted position signals a leftward turn for the Democratic agenda.
Great.
FOX News reported:

Rep. Henry Waxman — a liberal ally of Speaker Nancy Pelosi — has wrested the chairmanship of the powerful House Energy and Commerce Committee from veteran Rep. John Dingell when the new Congress convenes in January.

Waxman, a California liberal and avid environmentalist and booster of health care programs, toppled Dingell Thursday on a vote of 137-122 in the Democratic Party caucus, capping a bitter fight within party ranks.

Dingell has been the top Democrat on the panel for 28 years and is an old-school supporter of the auto industry. Waxman has complained that the committee has been too slow to address environmental issues like global warming.

“The argument we made was that we needed a change for the committee to have the leadership that will work with this administration and members in both the House and the Senate in order to get important issues passed in health care, environmental protection, in energy policy,” Waxman said after the vote.

Say good-bye to new oil and nuclear energy development.
This ought to make America’s enemies happy.

Of course… Today’s vote was by secret ballot— something that liberals plan on taking away from working Americans.