Back in July Democratic Speaker Nancy Pelosi said she was not about to let the United States drill or develop our domestic energy reserves.
Pelosi said this about high gas prices: “Drilling is a hoax!”

Pelosi’s answer to the gas crisis: “Drilling is a hoax.”

But, in August after gas prices continued to rise Pelosi fell for the hoax…
She said that she would consider a vote on drilling.

This was out of character for the Far Left Speaker and her party.
For decades, Democrats have blocked efforts to responsibly develop the energy resources our country possesses, transforming vast areas of opportunity into “The No Zone.” 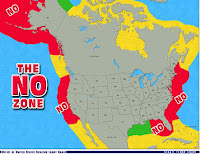 But, with two-thirds of Americans supporting offshore drilling and after gas prices soared to over $4 per gallon in July Speaker Pelosi said the Left would consider drilling.

It was a hoax.

This week it was back to business as usual for the Left.
The 9th Circuit Court of Appeals just blocked a major drilling effort in the Beaufort Sea in Alaska.
Don’t look for any Democrats to object.
Investor’s Business Daily reported:

Remember those 68 million acres House Speaker Nancy Pelosi said the oil companies had to use or lose? According to the 9th Circuit Court of Appeals in San Francisco, they can’t drill there either…

Last Thursday, the 9th Circuit Court of Appeals blocked a major drilling effort in the Beaufort Sea, ruling that federal officials failed to properly address environmental concerns when they granted permission to Shell Oil to drill there. The decision followed a temporary order issued last year that halted Shell’s drilling at Sivulliq, 16 miles off the coast of northern Alaska.

“There remains substantial questions as to whether Shell’s plan may cause significant harm to the people and wildlife of the Beaufort Sea region,” the current ruling said.

It was prompted by a pair of combined lawsuits filed by environmental and Native groups that alleged oil drilling in the Beaufort Sea would disturb migrating whales.

In a July interview with IBD in which we asked better questions than Katie Couric, Alaska Gov. Sarah Palin, before she was picked as John McCain’s running mate, said: “There are even bigger sources of crude than ANWR . . . such as offshore areas like the Chukchi Sea and Beaufort Sea.”

Palin in May challenged the listing of the polar bear as an endangered species; the listing was another move designed to block drilling in these areas. She argued that polar bears were and are well-managed and their population has dramatically increased over the last 30 years. Since 1960, when the Alaska oil hunt began, only two oil-related bear fatalities have been documented, according to the federal Mineral Management Service.

The problem, Palin said, was “we frequently find ourselves at the mercy of those who think that we must be protected from ourselves. Shell is up here wanting to drill offshore, but they’ve been fighting various environmental groups through the 9th Circuit Court and are running into very fierce push-back.”

The Alaskan Outer Continental Shelf holds 26.6 billion barrels of recoverable crude oil and 132 trillion cubic feet of recoverable natural gas, according to recent Minerals Management Service estimates. Most of that is in the Beaufort and Chukchi seas.

And, so it goes…
The Democrats and their peers in the courtroom continue to deny America access to our domestic oil reserves.
And, America will forced to deal with the consequences at some later date.

More… Gasoline will top $4 a gallon again if the politicians in Washington retreat into their cocoons once more.