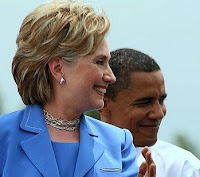 Hillary Clinton will accept the Secretary of State cabinet position with the Obama Administration.
Drudge Report and The Guardian reported:

Hillary Clinton plans to accept the job of secretary of state offered by Barack Obama, who is reaching out to former rivals to build a broad coalition administration, the Guardian has learned.

Obama’s advisers have begun looking into Bill Clinton’s foundation, which distributes millions of dollars to Africa to help with development, to ensure that there is no conflict of interest. But Democrats do not believe that the vetting is likely to be a problem.

Clinton would be well placed to become the country’s dominant voice in foreign affairs, replacing Condoleezza Rice. Since being elected senator for New York, she has specialised in foreign affairs and defence. Although she supported the war in Iraq, she and Obama basically agree on a withdrawal of American troops.

Clinton, who still harbours hopes of a future presidential run, had to weigh up whether she would be better placed by staying in the Senate, which offers a platform for life, or making the more uncertain career move to the secretary of state job.

Edge to Obama.
It does help pad Hillary’s resume but is anyone else surprised to see Hillary so compliant since her primary loss?
Ace and Allahpundit are skeptical.