Some pundits argued this morning that this wasn’t a landslide we witnessed last night.
It sure felt like a landslide.
It was some kind of disaster anyway. 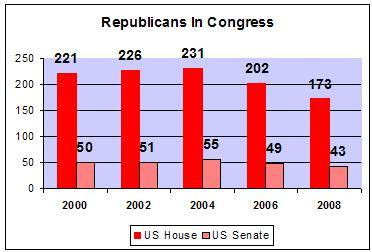 I put this together this morning to show the rise and decline of the GOP Congress under President George W. Bush.

This does not include exact numbers from the bloodbath last night.
It could be worse.

There are still several US House and Senate seats that have not been decided.
There will be a recount later this month in Minnesota to determine the winner between Norm Coleman and Al Franken.