Last night we reported ON THE RECORD that Al Franken is coming to Washington, DC to meet with Senate leaders. Senator Norm Coleman, back in Minnesota, is reported to have said it is presumptuous of Franken to come here to DC to meet with leaders when the recount has not been concluded in Minnesota.

Well..it turns out that there is more to the story…he is here for a very fancy fundraiser:

Senate Democrats are holding an elaborate fundraiser for the failed radio host and senatorial candidate tonight in the nation’s capital–
For $12,000 you can dine with Franken and the lib of your choice: 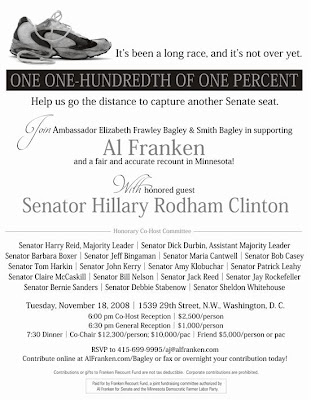 Power Line has the latest on the recount.

UPDATE: Franken is then leaving DC to head to New York City for a fundraiser with Al Bore and George Soros.