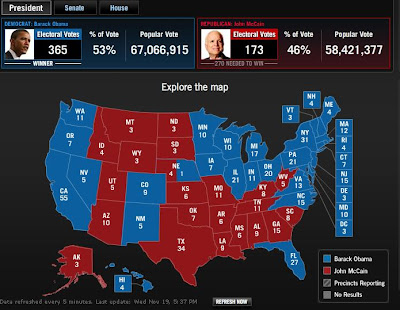 For only the second time in 26 presidential elections, Missouri did not go with the winning candidate.
Prime Buzz reported:

It looks like John McCain has won Missouri — the last state not marked in either red or blue on the electoral map.

Assuming the state certifies the count, it will place the overall electoral vote at 365 for Obama and 173 for McCain.

The office said 3,159 provisional ballots remain to be added to those totals, but even if Obama wins them all, McCain has a big enough margin to win the state’s 11 electoral votes.

This makes Missouri the only battleground state this year that did not go to The One.
Surely, it was the GP Factor that swung Missouri into the McCain Column. I’d like to think that it was well informed GP readers who flipped the state away from the Marxisant radical.
Thank you all for making this possible.