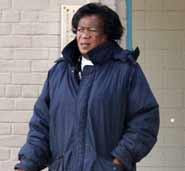 Zeituni Onyango lives in a disabled-access flat in a South Boston slum. She has lived in public housing for 5 years. (Times Online)

The AP did not mention anything about the legal status of long lost Uncle Omar who was evicted from his Boston home in 2000 for not paying rent.
Where can you find a good Ohio investigator when you need one?

Aunt Zeituni is now also living in Boston, and recently made a $260 campaign contribution to her nephew’s presidential bid.
Breitbart reported:

Barack Obama’s aunt, a Kenyan woman who has been quietly living in public housing in Boston, is in the United States illegally after an immigration judge rejected her request for asylum four years ago, The Associated Press has learned.

Zeituni Onyango, 56, referred to as “Aunti Zeituni” in Obama’s memoir, was instructed to leave the United States by a U.S. immigration judge who denied her asylum request, a person familiar with the matter told the AP late Friday. This person spoke on condition of anonymity because no one was authorized to discuss Onyango’s case…

The AP could not reach Onyango immediately for comment. No one answered the telephone number listed in her name late Friday. It was unclear why her request for asylum was rejected in 2004.

No Quarters asks these important questions:

** How did she contribute a total of $260 to her nephew’s campaign in a series of small donations from her South Boston address if she is not a United States citizen?
** Are many illegal immigrants and foreigners submitting small donations to the Obama campaign in order to avoid scrutiny by the FEC?
** How does she qualify for public housing if she is not a United States citizen?
** How is Obama to be trusted to reform the immigration system if his relatives are breaking immigration laws and living illegally in this country?
** And why did the Senator not file a form I-130, a Petition for Alien Relative, on behalf of his aunt after her request for political asylum was rejected? As a United States Senator, he certainly could expedite the adjudication of such a petition.

Not only did Obama leave his Dear Auntie in squalor; he allowed her to stay in the country he desires to represent as President illegally.

Power Line has more on this latest Obama controversy.

UPDATE: Auntie Onyango was silenced by the Obama Campaign until after the election.
This is what Auntie Onyango told the Times Online who broke the story that she was living in a Boston slum:

She declined to answer most other questions about her relationship with the presidential contender until after the November 4 election. “I can’t talk about it, I just pray for him, that’s all,” she said, adding: “After the 4th, I can talk to anyone.”

That’s interesting.
Auntie Onyango was told not to speak until after the election.
Who might have told her that?