FOX News interviewed several people on the streets of NYC this weekend including an elitist couple from Baltimore who were out shopping and dining in the Big Apple. The two talked about how the economic meltdown was affecting their lives.
You really have to appreciate two vacationing elitists at a popular New York City deli talking about how rough things are in America.

The Obama supporters also talked about how the “revolution” represented “enough is enough” and that “hope is on the way” in Washington DC. They believe that the people in Washington “finally got the message” after the election.
Change-Hope.
The video is HERE. 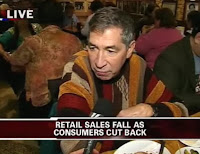 The poor dears.
They really do look like they are suffering terribly.