Dems are still praying for a frog march…
Although the country continues to face a devastating financial crisis and a prolonged war against radical Islam, Democrats want to make investigations of the Bush Administration a priority next year after he leaves office.

One of the cases involves the crooked former Alabama Governor Don Siegelman.
Democrats believe that Karl Rove was behind his prosecution.
The democrat’s case is based on testimony given by nutjob Dana Jill Simpson. 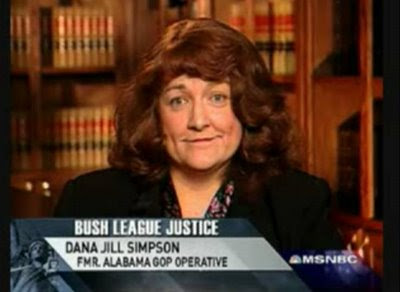 Dana Jill Simpson, a disturbed Alabama lawyer, told “60 Minutes” earlier this year that she called Karl Rove in Virginia to discuss politics. She also said she was at a KKK meeting and that she was working undercover for Rove. Rove says there were no calls to Virginia. He’s never lived in Virginia.

Every nutty story Dana Jill Simpson told has not panned out including the story that she talked with the crooked Alabama governor…
But, this didn’t stop CBS and “60 Minutes” from running a hit piece on Karl Rove based entirely on her testimony.
Of course, Democrats still believe Simpson’s every word.
This would make for great television.
Bring it.

Today The New York Times reported on the Bush trials:

When a Congressional committee subpoenaed Harry S. Truman in 1953, nearly a year after he left office, he made a startling claim: Even though he was no longer president, the Constitution still empowered him to block subpoenas.

“If the doctrine of separation of powers and the independence of the presidency is to have any validity at all, it must be equally applicable to a president after his term of office has expired,” Truman wrote to the committee.

Congress backed down, establishing a precedent suggesting that former presidents wield lingering powers to keep matters from their administration secret. Now, as Congressional Democrats prepare to move forward with investigations of the Bush administration, they wonder whether that claim may be invoked again.

“The Bush administration overstepped in its exertion of executive privilege, and may very well try to continue to shield information from the American people after it leaves office,” said Senator Sheldon Whitehouse, Democrat of Rhode Island, who sits on two committees, Judiciary and Intelligence, that are examining aspects of Mr. Bush’s policies.

Topics of open investigations include the harsh interrogation of detainees, the prosecution of former Gov. Don Siegelman of Alabama, secret legal memorandums from the Justice Department’s Office of Legal Counsel and the role of the former White House aides Karl Rove and Harriet E. Miers in the firing of federal prosecutors.