This was really twisted. 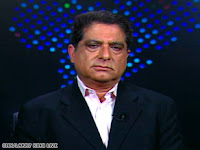 Deepak Chopra believes “Washington” was responsible for the attacks in Mumbai.
HuffPo and CNN reported:

Chopra: What we have seen in Mumbai has been brewing for a long time, and the war on terrorism and the attack on Iraq compounded the situation. What we call “collateral damage” and going after the wrong people actually turns moderates into extremists, and that inflammation then gets organized and appears as this disaster in Bombay. Now the worst thing that could happen is there’s a backlash on the Muslims from the fundamental Hindus in India, which then will perpetuate the problem. Inflammation will create more inflammation.

CNN: Let me jump in on that because you’re presuming something very important, which is that it’s Muslims who have carried out these attacks and, in some cases, with Washington in their sights.

Chopra: Ultimately the message is always toward Washington because it’s also the perception that Washington, in their way, directly or indirectly funds both sides of the war on terror. They fund our side, then our petrol dollars going to Saudi Arabia through Pakistan and ultimately these terrorist groups, which are very organized. You know Jonathan, it takes a lot of money to do this. It takes a lot of organization to do this. Where’s the money coming from, you know? The money is coming from the vested interests. I’m not talking about conspiracy theories, but what happens is, our policies, our foreign policies, actually perpetuate this problem. Because, you know, 25% of the world’s population is Muslim and they’re the fastest growing segment of the population of the world. The more we alienate the Muslim population, the more the moderates are likely to become extremists.

It makes you wonder who he thinks “the right people” are.
America has been going after Al-Qaeda and the nations that harbor and fund terrorists for 7 years now.
To blame the attacks in Mumbai on American policy in Iraq or Afghanistan or wherever is just wrong.