Your 5 minutes are up. 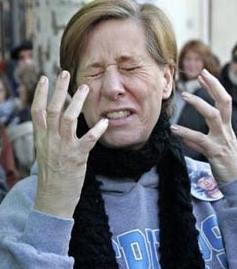 Poor Cindy Sheehan. She’s convinced that her antiwar message still matters unaware that her usefulness to the Left ended a long time ago.
The liberals certainly have no need for her now- especially since they will be calling the shots in 60 days.

But, that doesn’t keep Mother Sheehan from trying to remain relevant.
Here’s her latest Veterans Day message to Bush:

I am writing this to you on the fifth Veteran’s Day I have mourned the death of my son, Casey Sheehan. Casey was a soldier in the Army. You killed my oldest son with your lies and greed for Empire. Casey never became a Veteran because he came home in one of those pesky flag draped coffins that your mother doesn’t want to bother her “pretty mind” with.

During that other illegal and immoral war that you and your VP, Dick, had the good sense to dodge, your mother never had to go through one second of worry for your safety, did she? You were too busy doing your drugs and going AWOL to bother her “pretty mind” about that. What galls me the most when I think about my brave and honorable son’s needless and untimely death, is that you were so cowardly and worthless when you were his age and you had the nerve to condemn thousands of our children to death or disability with your lies.

George, I have written you letters before. I have demanded your resignation and also promised you that I would work for your impeachment. blah. blah.

Hopefully this woman will get some help once Bush is gone.