A new Secretary of State? 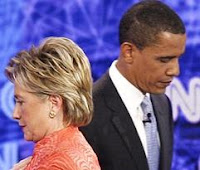 So, this is Hillary’s reward for stumping for The One?

President-elect Barack Obama has met in Chicago with Sen. Hillary Rodham Clinton, who is under consideration for a top post such as secretary of state.

A Democratic official says the two former presidential rivals met Thursday afternoon in Obama’s downtown office. The official spoke on condition of anonymity because he was not authorized to release the information.

The motorcade of Clinton, who receives Secret Service protection as a former first lady, was seen leaving the office complex shortly before Obama left for the day.