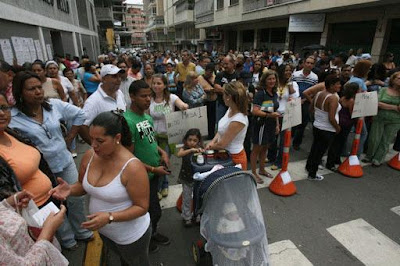 Venezuelans voted today in regional contests on what is considered a referendum on the Chavez socialist revolution.
CNN reported:

Venezuelans swarmed the polls on Sunday to cast ballots in hundreds of gubernatorial, mayoral and legislative elections.

But for President Hugo Chavez, the election is about himself — and he’s not even on the ballot.

Widely seen as a test of his influence over voters, Sunday’s elections are the first since Venezuelans shot down a referendum that would have allowed Chavez to run for his third six-year term.

Turnout was high for the voting, electorial officials told The Associated Press.

The Devil’s Excrement is following the election and has this update:

9:06 PM I am hearing that the opposition is doing well and will surprise in two states and that Chavismo lost Barinas. If the opposition pulls off the Metropolitan Mayor, we are talking big upset for Hugo. I have this from two sources, one of which had a negative view coming into the election. The best part is that they agree on the upsets even.

We’re trying to confirm other races

UPDATE: (11:00 PM CST) Caracas Chronicles has this latest news on the the opposition wins:

When all is said and done, we’ll have 5 governorships, including the three most populous, as well as Metro Caracas. We still can’t win anywhere rural, though.

I’m thrilled about the results in Caracas – especially Petare, where Carlos Ocariz is set to win big.

They are still counting votes and many of the races have not been called yet.

UPDATE: (Monday AM) Chavez and the Opposition share the spoils.
Die Welt reported:

Allies of the anti-U.S. president won 17 of 20 states despite widespread voter complaints the government has done too little to control some of the world’s worst murder rates and Latin America’s highest inflation.

The opposition held onto the two states it won at the last regional elections four years ago and also beat Chavez veteran aides in the heavily populated state metropolitan area around Caracas as well as the mayoralty of the capital.

In the two remaining state races, which the national election authority said were too close to call, the opposition claimed slim victories, citing official local results.

The mixed results triggered a public relations battle as each side fought to seize the momentum by persuading Venezuelans it was the victor in an election where a high 65-percent of voters cast ballots.