The G-20 is meeting in Washington DC today. 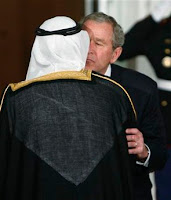 U.S. President George W. Bush (R) greets Saudi Arabia’s King Abdullah upon arrival at the North Portico of the White House before a dinner for the participants in the G20 Summit on Financial Markets and the World Economy in Washington November 14, 2008.
(Jim Young/Reuters)

US President George W Bush says he is pleased with progress in world leaders’ talks on the financial crisis, but has warned of the dangers of protectionism.

Mr Bush said there had been frank discussions and some progress, but there was still more work to be done.

UK PM Gordon Brown said he wanted to see international banking systems “cleaned up” and any measures agreed at the summit implemented immediately.

Leaders from 20 of the world’s biggest economies are at the Washington summit.

Correspondents say there are some divisions between Europe, which wants stricter market rules, and the US and other countries, which prefer more moderate reforms.

“One of the dangers during a crisis such as this is that people will start implementing protectionist policies,” Mr Bush said as talks resumed on Saturday.

But he said he was pleased leaders had reaffirmed the “principles of open markets and free trade”.

The EU moved to sign a free trade treaty with Colombia last week… Europe will also grab our existing markets there, because U.S. companies export virtually the same products to Colombia as Europe: $9 billion in chemicals, auto parts, industrial equipment and capital goods. Europe’s goods will sail in duty-free. America’s will be saddled with 35% tariffs.

At the same time, Pelosi and Democrats are blocking a promised US free trade agreement with our ally in South America.