Unfortunately, Barack Obama’s win did not put the race baiters out of business. 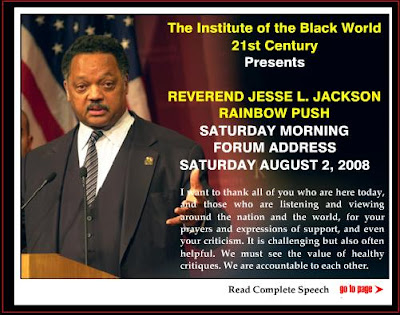 Black leaders including Jesse Jackson, Al Sharpton and Louis Farrakhan will meet this week in New Orleans to push for more “change” in local communities. The conference will focus on issues like education reform and fair wages.
Farrakhan will give the closing speech on Sunday.
KATC and Free Republic reported:

To Marc Lamont Hill, the election of Barack Obama proves black America can reach a goal once considered unattainable, but it doesn’t end the fight on such issues as education reform, job creation and fair wages _ a focus of a State of the Black World Conference opening in New Orleans this week.

“Barack Obama is not going to change everything. But what he can do is be an ally, rather than an enemy to our struggle the way George Bush has for the last eight years,” said Hill, an assistant professor of urban education and American studies at Temple University in Philadelphia.

Hill is among hundreds of black leaders expected in New Orleans for the conference, organized by the Institute of the Black World 21st Century.

The goal of the gathering is to devise policy initiatives that can be promoted nationally, from improving education to bringing parity in drug sentencing and cracking down on inner-city gun violence. They also want to capitalize on grassroots energy generated by Obama’s election to push for more change in local communities.

Hill noted issues ranging from expansion of a living wage to strides in unionization and reaffirming a commitment to public education where he believes Bush has let urban, black and working-class communities down.

“Millions of people marched on ballot boxes because they had hope,” said Ron Daniels, president of the institute. “Now, we want to translate that hope into tangible policies which will advance the interests of not only black people, (but also) Latinos, Asians, Native Americans and poor and working people in the middle class.”

The conference, which opens Wednesday, will seek the viewpoints of veteran civil rights leaders such as the Rev. Jesse Jackson and up-and-coming leaders like Hill and Veronica Conway. Nation of Islam leader Louis Farrakhan is expected to speak Sunday, the final day of the conference.

Final Call has more on the panelists and agenda of this year’s conference:

While people of African descent are excited about the prospect of an Obama victory, most seasoned observers concur that a myriad of issues rooted in institutional racism and poverty will continue to plague Black people in America and the world whoever wins the White House. “The failure of government to respond effectively to the tragedy of Katrina mirrors a failure to act in Darfur, the Democratic Republic of Congo and Haiti. Millions of our people around the world suffer because of these failures of vision and will,” remarked Rick Adams, chairman of the conference planning committee. “SOBWC will be our political convention, a time to collectively embrace priority policy proposals to present to the new administration.”

UPDATE: David Thompson has a very interesting article on race.