“This is a guy who lives in my neighborhood who’s a professor of English in Chicago who I know and who I have not received some official endorsement from… The notion that somehow that by me knowing someone who engaged in detestable acts 40 years ago when I was 8 years old somehow reflects on my values doesn’t make much sense, George.”

Barack Obama denied his close association with Bill Ayers during his campaign this year:

In a new afterword to his memoir, 1960s radical William Ayers describes himself as a “family friend” of President-elect Barack Obama and writes that the campaign controversy over their relationship was an effort by Obama’s political enemies to “deepen a dishonest narrative” about the candidate.

Ayers describes phone threats and hate e-mail he received during the campaign, and he bemoans Obama’s guilt by association.

During the campaign, Ayers’ friendship with Obama was a favorite subject of conservative bloggers and talk show hosts who insisted the two were closer than the candidate was admitting. Ayers’ new description of the relationship seems to contradict Obama’s statements.

** Ayers also confessed that he was involved with Obama’s early political career.

Bill Ayers and Jeremiah Wright made a joint appearance at Northwestern University on Friday. 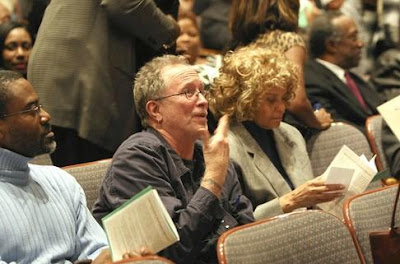 More… Allahpundit asks: “Has anyone queried The One on what sorts of crimes one would have to commit to lose their coveted ‘family friend’ status?”