The Senate will meet on Monday to debate the bailout of the troubled auto industry. A dozen to 15 GOP votes in the Senate will be needed to prevent opponents from blocking it in the Senate.
Titan Trader at Power Line Forum asked today:

Why should a taxpayer making $50 grand per year be expected to bail out NON-Skilled Union laborers making $152,256.00 per year. SKILLED Union Electricians who went through two years of day school and four years of night school – paid for by themsleves- make only half as much as the United Auto Workers.

UAW Contracts Put Detroit On Road to Ruin, and A $50B Bailout Would Only Be The Down Payment 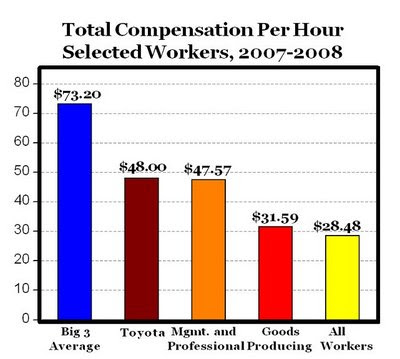