Do you remember Barack Obama’s outrageous and dishonest mock “Pro-Life” websites paid for by George Soros? 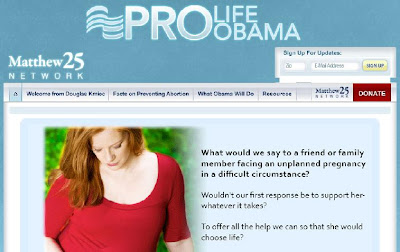 Yeah, they were all a lie.
One of the first moves by the most radical pro-abortion and infanticide candidate in the last 35 years will be to swell the number abortions both here and abroad.

At least Obama is keeping his promise to Planned Parenthood.

Barack Obama is looking to undo some 200 of George Bush’s actions and executive orders…
Including expanding abortive procedures.
The Washington Post reported:

Transition advisers to President-elect Barack Obama have compiled a list of about 200 Bush administration actions and executive orders that could be swiftly undone to reverse White House policies on climate change, stem cell research, reproductive rights and other issues, according to congressional Democrats, campaign aides and experts working with the transition team.

A team of four dozen advisers, working for months in virtual solitude, set out to identify regulatory and policy changes Obama could implement soon after his inauguration. The team is now consulting with liberal advocacy groups, Capitol Hill staffers and potential agency chiefs to prioritize those they regard as the most onerous or ideologically offensive, said a top transition official who was not permitted to speak on the record about the inner workings of the transition.

In some instances, Obama would be quickly delivering on promises he made during his two-year campaign, while in others he would be embracing Clinton-era policies upended by President Bush during his eight years in office.

“The kind of regulations they are looking at” are those imposed by Bush for “overtly political” reasons, in pursuit of what Democrats say was a partisan Republican agenda…

Obama himself has signaled, for example, that he intends to reverse Bush’s controversial limit on federal funding of embryonic stem cell research…

The new president is also expected to lift a so-called global gag rule barring international family planning groups that receive U.S. aid from counseling women about the availability of abortion.

But, the Washington Post and Democratic operatives do not see that increasing the number of abortions is a partisan agenda.
Figures.
This is the same paper that just yesterday admitted its bias during the election season.
Maybe we can expect a similar confession in 4 years.

Jules Crittenden has more on the hope and change to come.

Obama said on Saturday that, with the long U.S. presidential election campaign over, now was the time for Americans to put aside political differences and work together.

UPDATE: This year 54% of Catholics voted for Obama- essentially ignoring the church’s teachings and Obama’s radical record on abortion.