Maybe being humiliated by conservatives night after night just got old.
Colmes is leaving his top-rated program on FOX News. 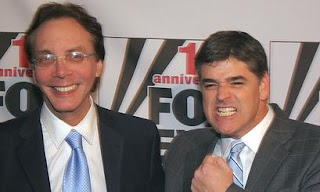 FOX News Channel’s (FNC) Alan Colmes will relinquish his role as co-host of Hannity & Colmes at the end of the year.

In announcing his decision, Colmes said, “I approached Bill Shine (FNC’s Senior Vice President of Programming) earlier this year about wanting to move on after 12 years to develop new and challenging ways to contribute to the growth of the network. Although it’s bittersweet to leave one of the longest marriages on cable news, I’m proud that both Sean (Hannity) and I remained unharmed after sitting side by side, night after night for so many years.”

Colmes will continue to have a presence on FNC as he will serve as a liberal commentator on a variety of FOX News programming, including Foxnews.com’s The Strategy Room and continue hosting his radio program, The Alan Colmes Show on FOX Talk, a division of FOX News Radio. He will also begin developing a weekend program.

Shine said, “We’re very sorry to see Alan reach this decision but we understand his desire to seek other creative challenges in his career. We value his incredible hard work in making Hannity & Colmes the most successful debate program on cable news and we’re going to miss him on the show. Thankfully, he will begin developing a weekend pilot for us.”

Hopefully, he will find success elsewhere.