Attorney General Michael Mukasey collapsed during a speech tonight to the Federalist Society.

He was rushed to the hospital after collapsing during a late-night speech in Washington.
AP reported:

Attorney General Michael Mukasey collapsed during a speech Thursday night and was being taken to a hospital. Associate Attorney General Kevin O’Connor said Mukasey began shaking while addressing the Federalist Society at a Washington hotel. “He just started shaking and he collapsed,” O’Connor said. “They’re very concerned.” O’Connor said he did not know whether Mukasey, 67, had regained consciousness.” 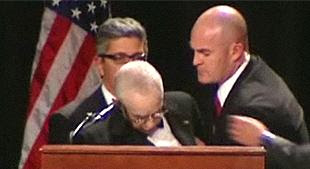 (FOX)
Ashcroft and others form a human wall so people could not view him as he was taken away, via Bloomberg:

Members of the audience, including former Attorney General John Ashcroft, formed a human wall so people could not view the attorney general as he was taken away. A member of the audience offered a prayer for Mukasey from the lectern and told everyone to go home.

Here are the remarks prepared for delivery by Attorney General Mukasey.

UPDATE: The attorney general is conscious, conversant and alert.