Abbas Warns Israel to Withdraw to 1949 Borders Or Face War

Things don’t look so good for Israel right now.
First, there were reports that Barack Obama will split Jerusalem and demand that Israel withdraw to 1967 borders…
Now, Palestinian leader Abbas warned Israel to withdraw to the 1949 borders or face war. 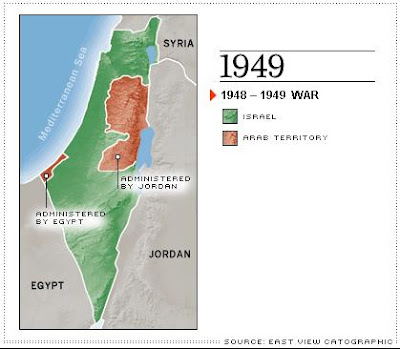 Palestinian Authority Chairman Mahmoud Abbas sent a letter to PA Arabs on Saturday saying Israel must retreat to its 1949 borders or face war. “The passage of years… will not force us to abandon or surrender a single inch,” of Judea, Samaria or Jerusalem, Abbas said in the letter, which was published by PA media.

It looks like the current Israeli leadership may think this is the best approach.
It’s never worked before but why not give it another go?
The Times Online reported:

Peres was loudly applauded for telling King Abdullah of Saudi Arabia, who was behind the original initiative: “I wish that your voice will become the prevailing voice of the whole region, of all people.”

This is what Israel has come to. A vile, unctuous quisling (Peres) who has left thousands of dead and maimed Jews in his wake, a man on the verge of dementia who was born a blithering idiot in the first place is now the President of Israel speaking in an official capacity and promising the Arabs he will open the gates for them again and bring more ruin to the country. Of course, that is not what’s wrong here. What’s wrong is the Israeli people en masse approve, and those who don’t are unwilling to lift a finger in opposition.

Barack Obama was elected less than two weeks ago and already Israel is threatened with destruction.
Change.