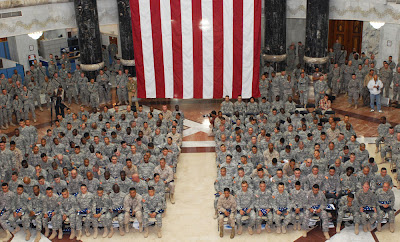 186 servicemembers from 60 different countries became US citizens during a swearing in ceremony on Election Day.
MNF-Iraq reported:

On a day when Americans exercised an extremely important democratic right, 186 U. S. servicemembers from across Iraq became U.S. citizens during a naturalization ceremony here at Al Faw Palace, Nov. 4.

Gen. Ray Odierno, commanding general, Multi-National Force – Iraq, presided over the ceremony and expressed his sincere appreciation for each and every new U.S. citizen, and the significance of becoming a citizen.

“Diverse as your backgrounds may be, you all now have one thing in common: you are all Americans,” Odierno said. “You represent the very best of all that our nation stands for: freedom, opportunity, equality and service.”

The ceremony was the 12th of its kind to be held in Iraq, but, for many troops, took on special meaning, as it occurred on Election Day for U.S. citizens. The newly naturalized servicemembers – from 60 different countries – have earned the right to vote for their new leaders.