More gas for the fire…
Georgia’s WSBTV discovered over 100,000 Georgia voters are also registered to vote in Florida or Ohio. 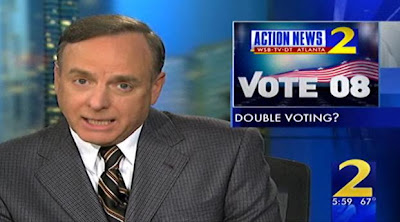 And, at least 3 Georgia men appear to have voted twice in this year’s election.
WSBTV reported:

Georgia’s Secretary of State has launched a full investigation and may seek criminal charges against three Georgia men who appear to have early-voted twice.

“This is extraordinarily disturbing,” said Secretary of State Karen Handel.

A team of investigative journalists from WSB-TV in Atlanta, WFTV in Orlando and WFTS in Tampa and WCPO in Cincinnati compared Georgia’s voter rolls with those in Florida and Ohio and found more than 100,000 people who appear to be registered to vote in more than one state, with no government oversight to catch it.

Jim Hoft
Jim Hoft is the founder of The Gateway Pundit, one of the top conservative news outlets in America. Jim was awarded the Reed Irvine Accuracy in Media Award in 2013 and is the proud recipient of the Breitbart Award for Excellence in Online Journalism from the Americans for Prosperity Foundation in May 2016.
BLM Independence Day Speaker in Washington DC: "No Protest Is Peaceful, We Want to Disrupt the Peace til We Get What We Demand" (VIDEO)
Nashville Mayor Shuts Down 4th of July Celebrations but Allows Black Lives Matter to Protest America on Independence Day
Driver Involved in I-5 Seattle Collision of Female Protesters at 1:30 in Morning Is Doxxed -- Antifa Calls Him "Racist Monster" but He's Black
CNN Then and Now: Mt. Rushmore During Obama Visit - "Majestic, Quite a Sight" - Mt. Rushmore During Trump Visit - "Monument to Two Slave Owners"
Black Lives Matter Protesters Dance and Stand on US Flag in DC Plaza on July 4th Holiday
See more...