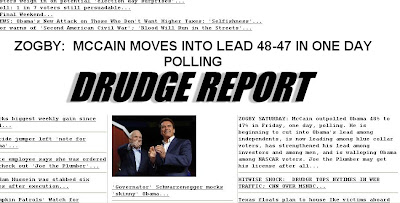 Drudge is reporting that McCain is making a strong move:

ZOGBY SATURDAY: McCain outpolled Obama 48% to 47% in Friday poll. He is beginning to cut into Obama’s lead among independents, is now leading among blue collar voters, has strengthened his lead among investors and among men, and is walloping Obama among NASCAR voters. Joe the Plumber may get his license after all…

The AP reported today that 1 in 7 voters are still persuadable.
This is NOT good news for the Obama Campaign.

UPDATE: Maybe this had something to do with the sudden McCain-Palin surge
Wink-Wink—