Yeah Right… Obama Said He Thought Ayers Had Been Rehabilitated

Oh, this was bad.
This was really bad…
Obama made a MAJOR MISTAKE tonight.
Barack Obama now says that he thought terrorist Bill Ayers had been rehabilitated.
Not true. 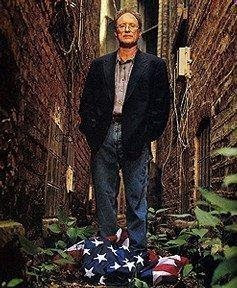 Former Weather Underground terrorist and Obama pal Bill Ayers stands on the US flag for a Chicago Magazine 2001 article titled “No Regrets.”

On September 11, 2001, The New York Times published, “No Regrets for a Love Of Explosives; In a Memoir of Sorts, a War Protester Talks of Life With the Weathermen” on the life of Bill Ayers.

Also in 2001, Bill Ayers also wrote about his terrorist bombings in his memoir, “Fugitive Days.” It was not an apology.

Now get this… Bill Ayers was serving with Barack Obama on the Woods Fund Board in 2001.

Barack Obama said today that he thought that Bill Ayers was rehabilitated.
Ben Smith at The Politico reported:

In an interview with the sympathetic conservative talk radio host this afternoon, Obama offered the clearest explanation yet of how an extremely careful politician allowed himself anywhere near a former ’60s radical who would become a Republican target in this year’s presidential campaign.

Obama “had assumed” from Bill Ayers’ stature in Chicago, he told the Philadelphia-based Michael Smerconish, that Ayers had been “rehabilitated” since his 1960s crimes.

In the interview, which was taped this afternoon and will air tomorrow, and which you can listen to above, Obama recalled moving back to Chicago after law school, and becoming involved in civic life there.

“The gentleman in question, Bill Ayers, is a college professor, teaches education at the University of Illinois,” he said. “That’s how I met him — working on a school reform project that was funded by an ambassador and very close friend of Ronald Reagan’s” along with “a bunch of conservative businessmen and civic leaders.”

“Ultimately, I ended up learning about the fact that he had engaged in this reprehensible act 40 years ago, but I was eight years old at the time and I assumed that he had been rehabilitated,” Obama said.

So… Obama thought that Bill Ayers was rehabilitated while at the same time Ayers was publishing article after America-hating article on not doing enough while he was a Weatherman terrorist?
Yeah right.