This is getting really freaky.
Dear Leader gets 15 page spread in 2008 children’s textbooks.
This isn’t teaching, it’s indoctrination! 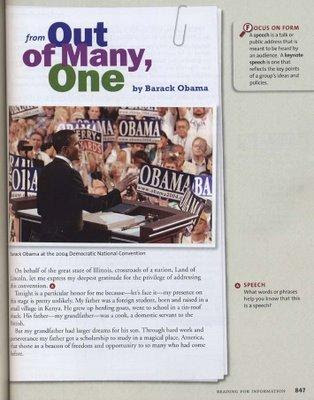 Maybe this was part of the Bill Ayers education plan?
8th grade students in Racine, Wisconsin are now using textbooks that contain a 15 page section on Barack Obama.
Note: No Hillary, No McCain, No Palin, No Bush… Just Obama!

This is beyond freaky.
Real Debate Wisconsin reported:

My 8th grade son is in an advanced English class at a public middle school here in Racine, Wisconsin. I just found out that my son’s new (copyright 2008) Wisconsin – McDougal Littell Literature book has 15 pages covering Barack Obama.

I was shocked – No John McCain, no Hillary Clinton, no George Bush – Just Barack Obama. I’m wondering how it is that Obama’s story gets put into an 8th grade literature book? It would be one thing, if it was just the tidbit about his boyhood days, but 15 pages, and they talk about his “Life of Service”. Honestly, what has Obama really done to be included in this book? Not only that, but on page 847 there is a photo of Obama at the 2004 Democratic Convention with at least 8 Obama signs in the background! Front & center is an www.obama2004.com sign.

Now I understand that many teachers are liberals, but does the school have the right to shove Obama down our kid’s throats? All the kids grouped together and read the story. After that, they discussed it… I guess it appears that Obama is planning ahead. If he doesn’t get his coveted Presidency, Obama is going to make sure, that the younger generations know all about him, and his “life of service”.

If you would like to see the 15 page story on Obama, it appears that you can order this book online. There is a note in the book that says, For more on Barack Obama, visit the Literature Center at www.ClassZone.com The book is: Wisconsin – 8th grade – McDougal Littell Literature – copyright 2008. The Obama story starts on page 830. I hope you will take the time to look at this book. I’m really angry about this – In fact, I would love to rip the pages right out of this book.