Dude what’s with all the awards?
Not even General Petraeus, the man who saved Iraq, has that much bling! 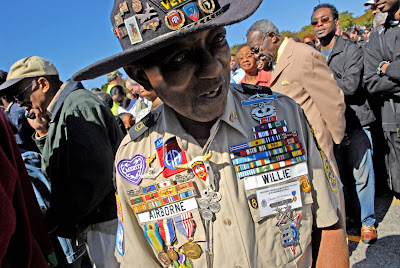 Charlie W. Williams of Raeford, N.C., a veteran of the Korean and Vietnam wars and supporter of Democratic candidate Sen. Barack Obama, lines up early to get into a rally at the Crown Coliseum in Fayetteville on Oct. 19. “He’s going to get a lot of white votes,” he said of his candidate. (Washington Times)

Unfortunately, Charlie W. Williams is a phony soldier.
This Ain’t Hell has the scoop on this highly decorated phony.