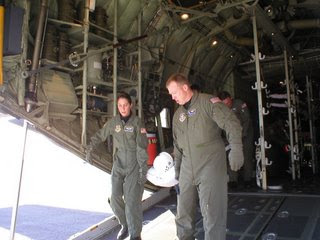 Lance Cpl. John McClellan returned home from Iraq in 2006 after surviving a sniper attack in Iraq.

This was from an April 2007 email from John’s family on their son’s recovery:

I don’t think I ever relayed this, but in the beginning when John was first injured, Our U.S. House of Representative, Kenny Hulshof had tried to visit John at the NNMC hosptial (before we arrived). Because he wasn’t a relative, they would not let him up to see John. I heard this from Rep. Hulshof’s assistant. At that time, I told him, “He should have told him he was my brother!!!” We laughed.

The next day, as Carl & I were leaving the Columbia airport for Bethesda, Rep Hulshof’s plane was arriving as we were waiting for our plane. We talked briefly and I reiterated my suggestion that “You should have told them you were my brother”. We laughed.

Yesterday, we were able to visit, Rep. Hulshof at his office at the Capitol. As we walked in and were greeted by him, John said, “Hi, Uncle Kenny!” We ALL laughed!! Kenny knew right away what that was all about. Too funny!!! 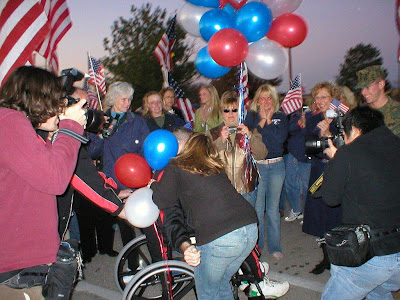 Lance Cpl. John McClellan was given a hero’s welcome when he flew back home to Columbia, Missouri for Thanksgiving in 2006 only a month after nearly losing his life in Iraq. 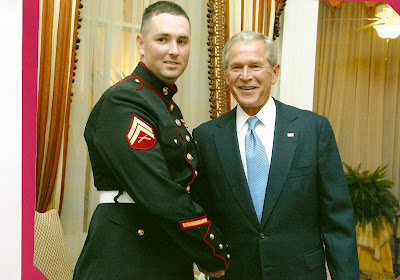 John met with President Bush in Washington DC.
It was a very proud moment for the whole family.
Congratulations John!