More hope and change…
A webpage at Barack Obama.com instructs young Obamatrons to “use their grandparents love against them” and get them to vote for the Marxisant radical. 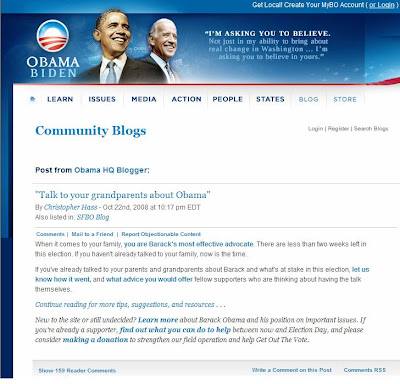 Here’s more from the Obama webpage:

The one thing most grandparents have in common is that they have the most wonderful grandchildren in the world – so clever, so handsome, so pretty, ever so precious. Even if you are still unsure of your path in life, and even if your parents and friends occasionally wonder about you, your grandma and grandpa love you and have faith in you.

That is your weapon! “Precious” needs to get on the phone and say, “Grandpa, Grandma, I am asking you to vote for Barack Obama…

When it comes to your family, you are Barack’s most effective advocate. There are less than two weeks left in this election. If you haven’t already talked to your family, now is the time.

If you’ve already talked to your parents and grandparents about Barack and what’s at stake in this election, let us know how it went, and what advice you would offer fellow supporters who are thinking about having the talk themselves.

So is this supposed to represent hope and change?
Disgusting.